To Boldly Go Where No Man Has Gone Before ...

Captain Kirk will soon arrive in some lucky person’s house and find his landing place on their wall, where no man has gone before. Although the Captain Kirk we are all so familiar with traveled in outer space, this version of Captain Kirk is coming from the studio of Joe Everson in Greenville, SC. The 36 X 48 painting of Captain Kirk is one of the most notorious space characters ever known. The painting was commissioned by FinListics Solutions to be auctioned off in William Shatner’s Annual Hollywood Charity Horse Show on June 1, 2019.

For Mr. Shatner’s charity, Joe selected an image of Captain Kirk and used his magic to create a spectacular piece that should be auctioned off for thousands of dollars, to benefit the many charities supported by William Shatner’s charity house show.In our first release about this charity event and FinListics' Solutions involvement with William Shatner's Hollywood Charity Horse Show, we promised to give you a quick background on Joe Everson. Joe moved to Greenville, S.C. a few years ago to sing with a quartet and pursue a musical career. With moderate success, he turned to his painting talents. He brought on Dan Lyles as an agent who suggested that he tie his musical abilities to his painting. This is when the anthem singing-patriotic painter gig got started!

Joe achieved viral success by singing the National Anthem while painting the “Raising of the Flag on Iwo Jima” at the same time. The viral video made its way to Fox News Channel in NYC and Joe was asked to perform live on their morning show, Fox and Friends. The next day he went to NYC, sang the anthem while painting the famous Iwo Jima scene upside down. This exposure made him, literally, an overnight sensation. He went from “starving artist”, to selling every painting off his website in less than 24 hours and a schedule full of bookings. Joe and his team are an inspiration for all entrepreneurs.

Joe now travels the nation performing for professional sports teams, Fortune 500 companies, and celebrities. The viral videos have over 220 million views! Joe, Dan and their Production Manager, Everett make a great team who are together bringing Joe's immense talents to the international forefront. Finlistics’ President and Founder, Stephen Timme was happy to be able to go to Joe’s studio and spend the afternoon with Joe and Dan brainstorming about their direction and vision for the future. 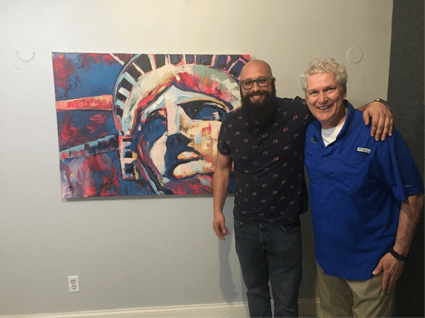 Stephen was so impressed with what he saw he bought his own Joe Everson original named, Breathe Free (Joe pictured on the left with Stephen on the right).

FinListics is proud to sponsor Joe's performance at the Hollywood Charity Horse Show. Between the painting he will create at the show (Iwo Jima) and the Captain Kirk painting available online, Stephen feels sure Joe's art works will benefit many in need.

Learn more about the charity here.

Posted in Other Topics